The trombone is a member of the brass family of instruments. It is easily recognized by its long slide, which is extended & retracted to change the pitch of a note. A trombone player is an important & prominent member of any band, as it creates a big sound that contributes to the depth & fullness of a band. The trombone we know today originated in Burgundy somewhere around the middle of the 15th Century. About four hundred years later (Mid 19th Century), efforts for a larger & louder sound made the bell of instrument bigger. And since then, the trombone has become an integral part of orchestral, big band, jazz, funk/fusion, ska, and even rock ensembles. The sound of a trombone is unmistakable. It's a "brassy" horn sound and while most folks think of that trademark "slide" sound of a very low pitch gliding up to its final destination note, like at the beginning of a New Orleans jazz song, the trombone is very capable of quick changes in register, transposition, volume and even trills. It's not uncommon to have as many, if not more, trombone players as trumpet players in a band. 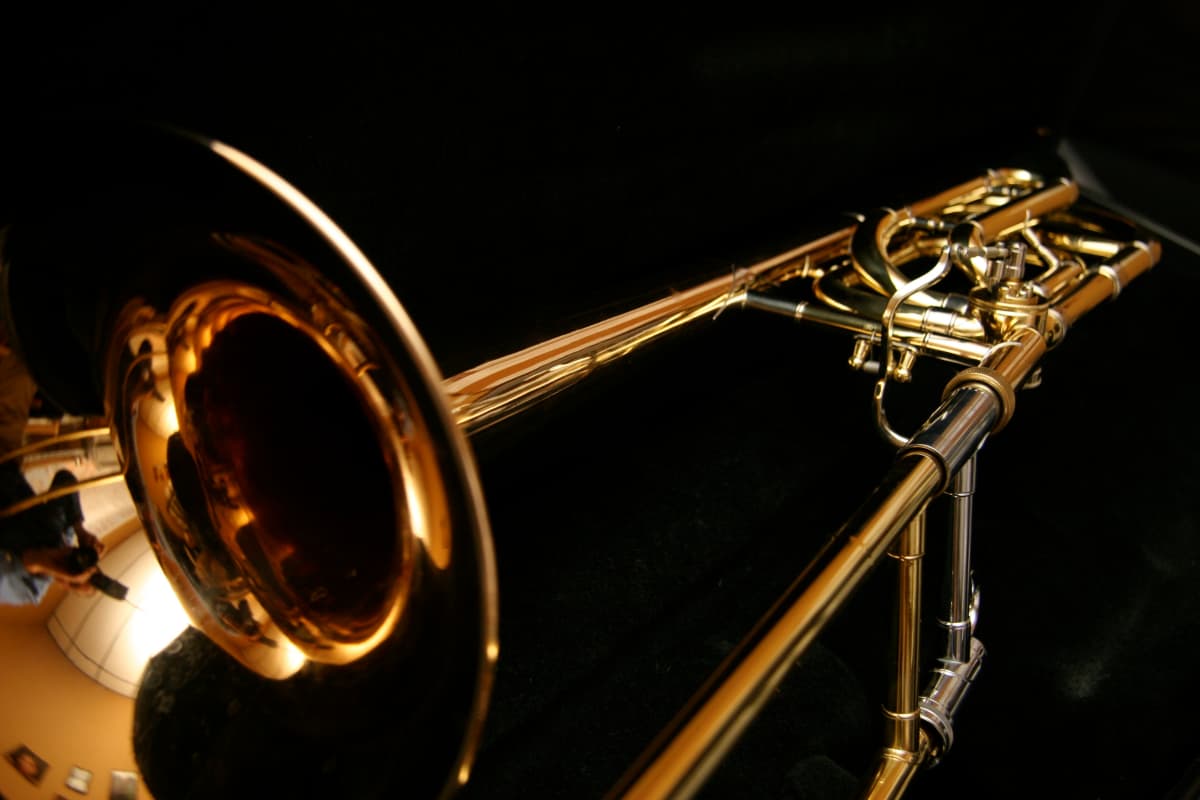 Uncle Jon's Music and Rentfromhome  is the easiest way to get your student started on trumpet. Select your  instrument, choose your FREE delivery option (to your home of office) or  pick up here at Uncle Jon's in Westmont, checkout, and you are done! We offer  only quality brand names (and even ask if you or your student's teacher  have any brand preferences when choosing your instrument), a quick &  easy checkout process, online account management (payment history,  online payments and more), easy returns & exchanges, and  upgrade/purchase opportunities at any time while renting. You may also  return your instrument and cancel your rental agreement at any time with  no penalties or further obligation.

The trombone has been around for a long time and some pretty famous people have enjoyed learning to play it over the years. Remember Star Trek: The Next Generation? Jonathan Frakes, who played First Officer William Riker, was an accomplished trombone player and even played in a number of episodes.

Legendary NASCAR driver & team owner Tony Stewart is the only driver in history to win a championship in both IndyCar and NASCAR. He's a three-time Cup Series Champion. And he also plays trombone.

And Grammy Award winning singer & songwriter Nelly Furtado is one of the most successful Canadian artists of all time. She's sold over 40 million records worldwide. How did she get her start? Trombone, of course!

GETTING STARTED WITH THE TROMBONE

The parts of a trombone, or its nomenclature, are few and make for a fairly simple instrument. What we could call the "bell section" of the trombone includes a variety of individual parts like the bell, brace, strut, bumper, counterweight, and so on. The famous valve slide easily attaches to the bell section with a thumb screw. The mouthpiece is inserted at the other end of the slide. The mouthpiece directs air and lip vibrations from the player into the body of the instrument. The trombone mouthpiece is large and the cup is deep, making it one of the easier brass instruments to produce a sound with, even as a beginner. And it's a lot of fun to play!